Yesterday morning students at my school sat M1, FP2 and the OCR FMSQ papers. This is the first of three posts looking at these papers and I’ll start with the Mechanics paper.

I’ll admit I’m feeling pretty tired at the moment and so I made a few mistakes that I had to correct as I went through the paper – have fun spotting them. Overall I think it was a standard M1 paper which included the obligatory question using a 3-4-5 triangle.

Question 1 was a very straight forward conservation of momentum question – as long as you don’t get confused with the direction the particles are moving in there are easy marks to get here. 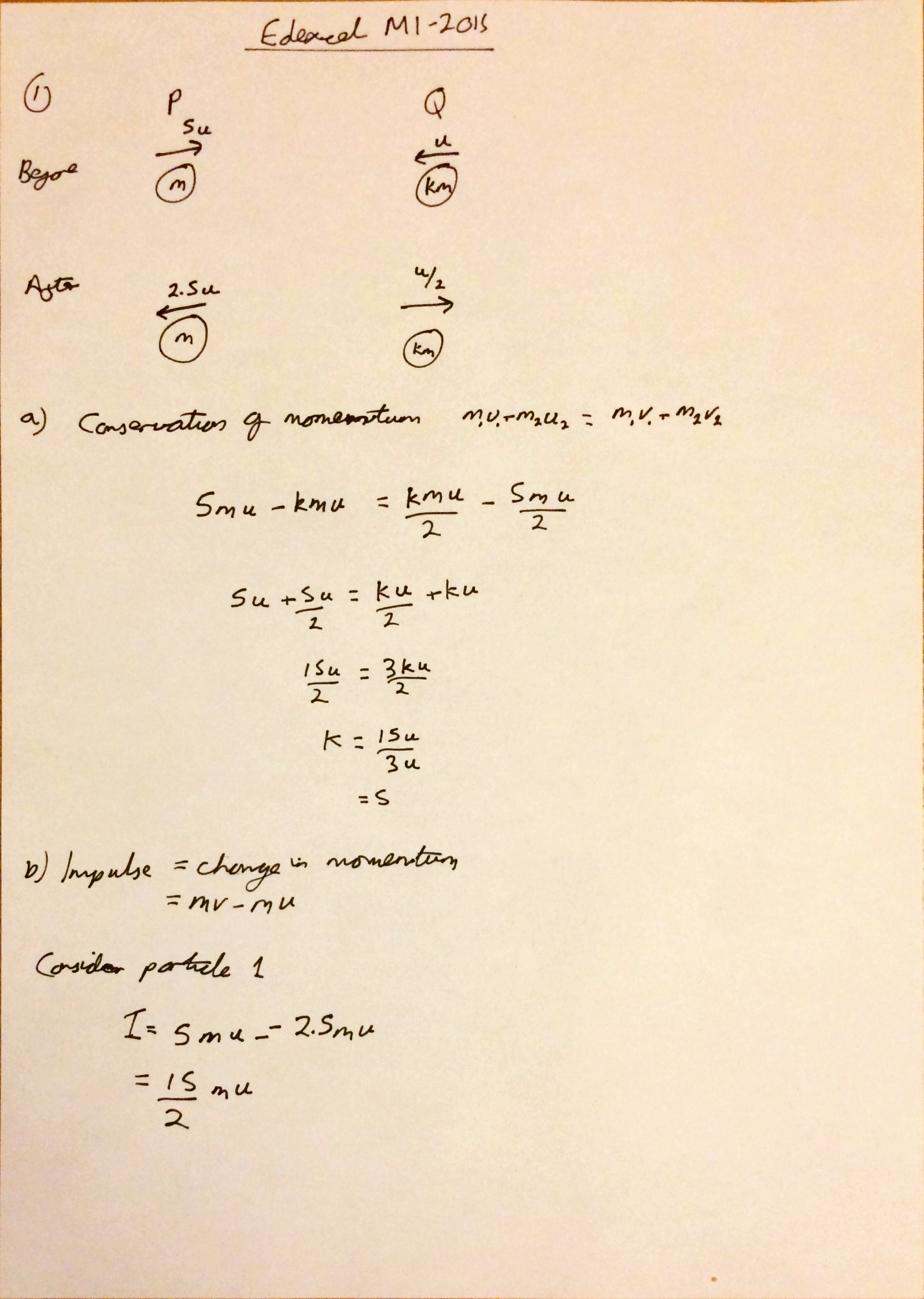 I thought that the projectiles question on this paper (Question 2) was really nice; no projection at an angle, just straightforward motion under gravity. Nice numbers too so that the arithmetic was relatively easy. The last part of this question was straightforward, though I can see some people working out the time to get from 14.7m to 19.6m and then the time back down instead of using symmetry. 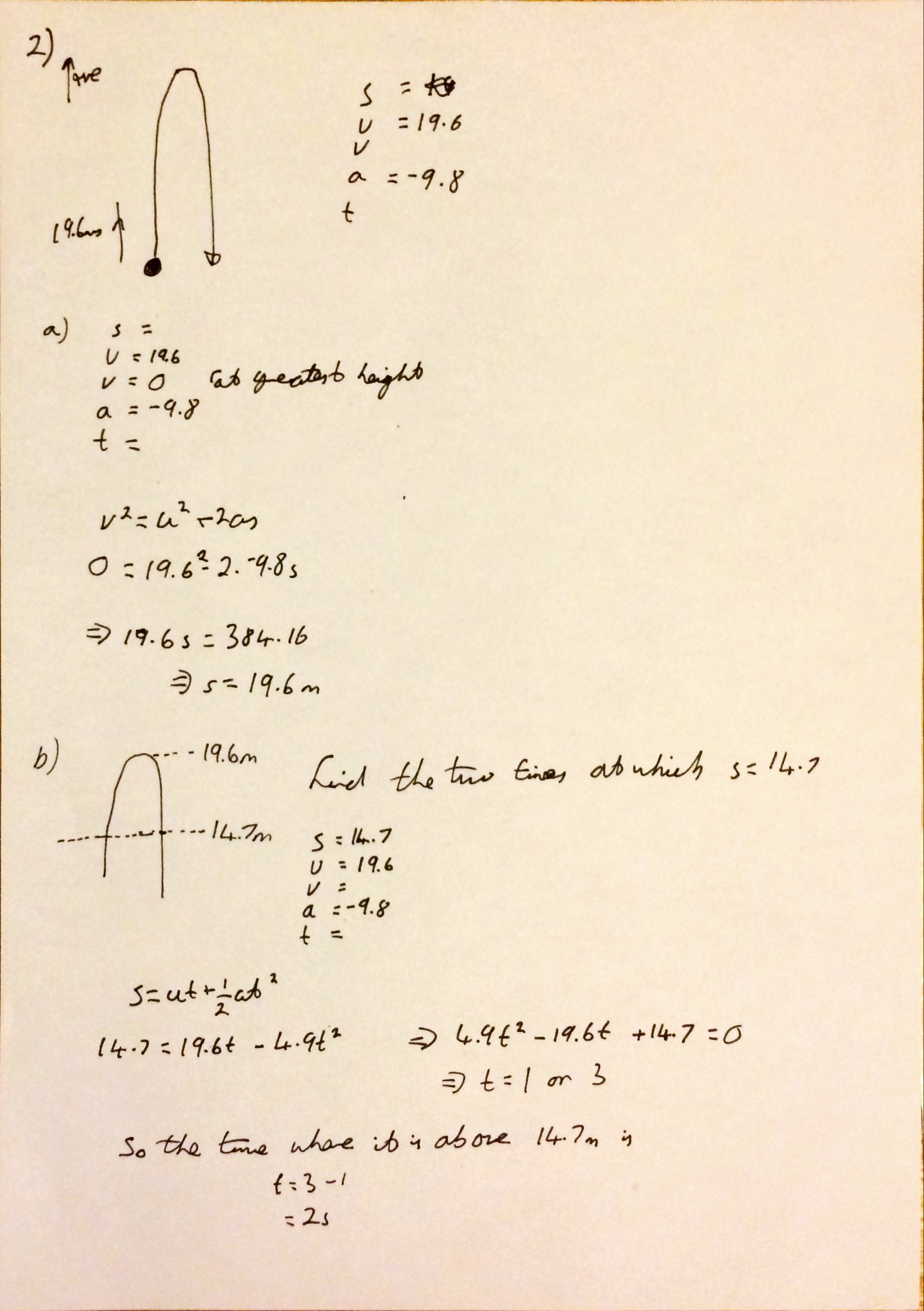 My students commented on how Question 3 was nice as you got 7 marks for just resolving in two directions. A very simple question really as long as you are confident with solving simultaneous equations. 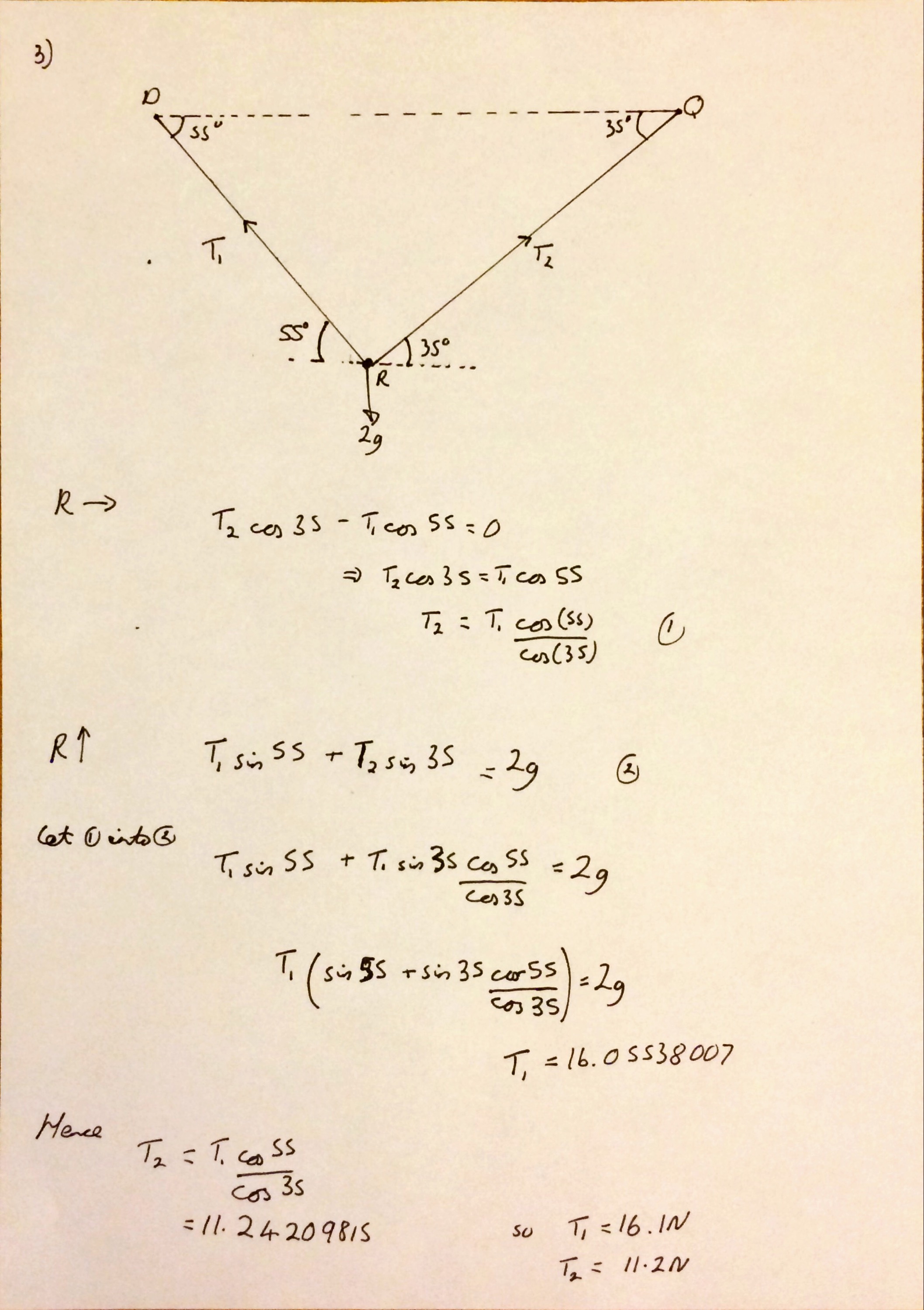 The first question that I made an elementary mistake on was Question 4. This year ion concerned a lift inside of which was a crate. If you recognise when to consider the motion of the system and the crate separately it is pretty easy. However, when I district did it and considered the motion of the lift-crate system I included the normal reaction of the crate in my force balance – very silly of me. 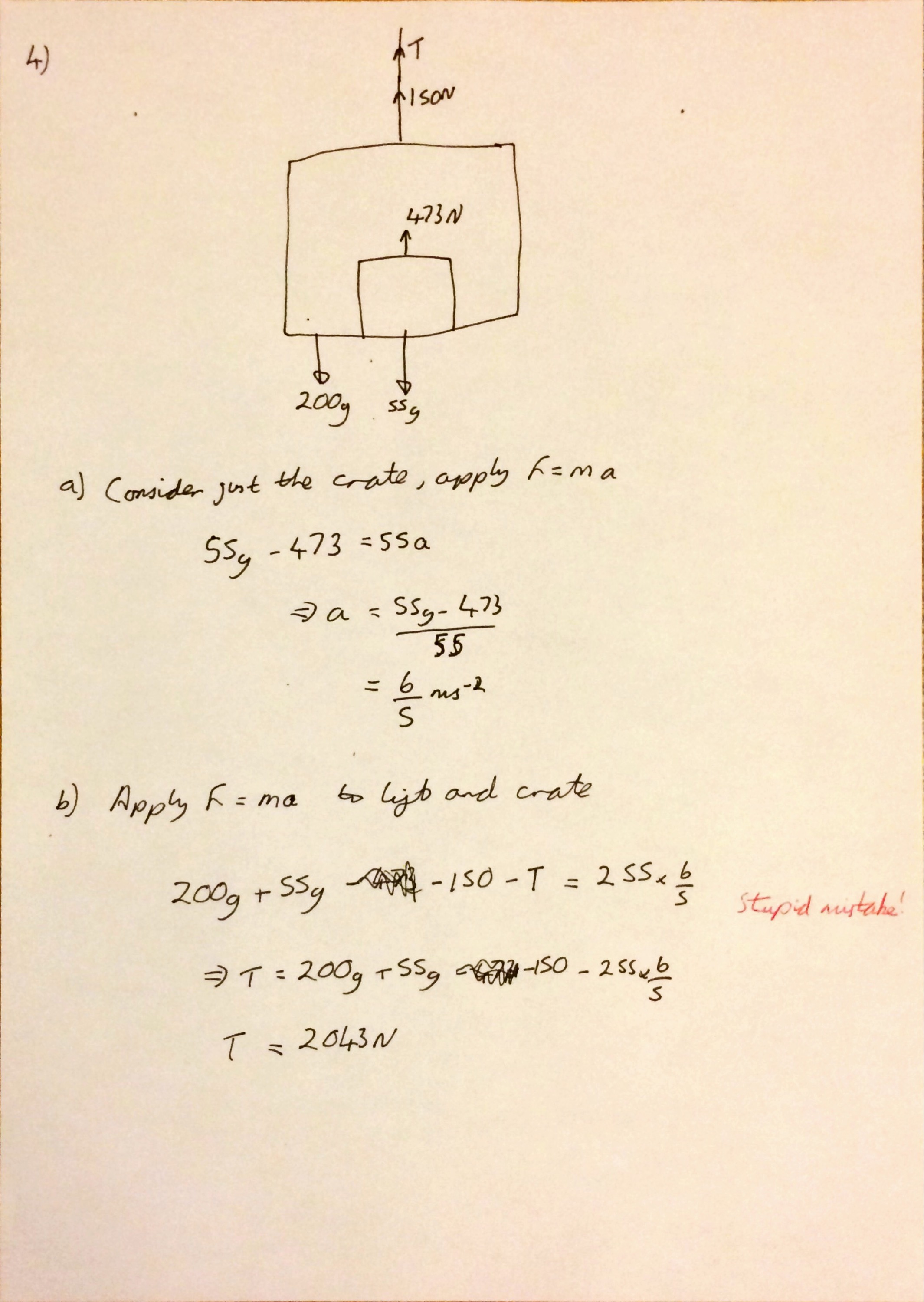 Question 5 was a typical moments question with a bar suspended from the ceiling and with particles suspended from it.  Taking moments about two points allows you to easily find the tension in the ropes for the first part. The second part is marginally trickier as you need to have an understanding of how the rod would move if the particle was changed. 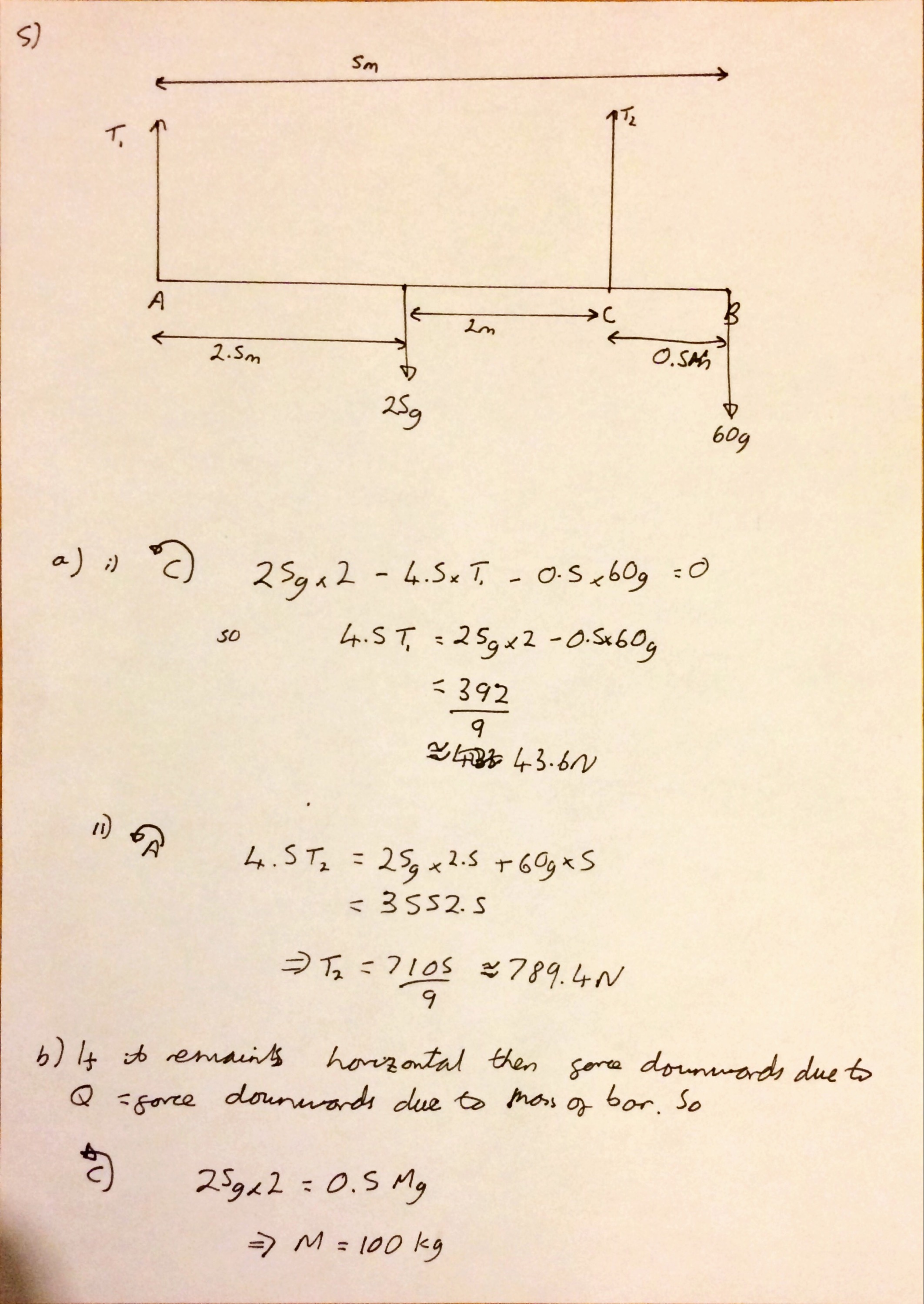 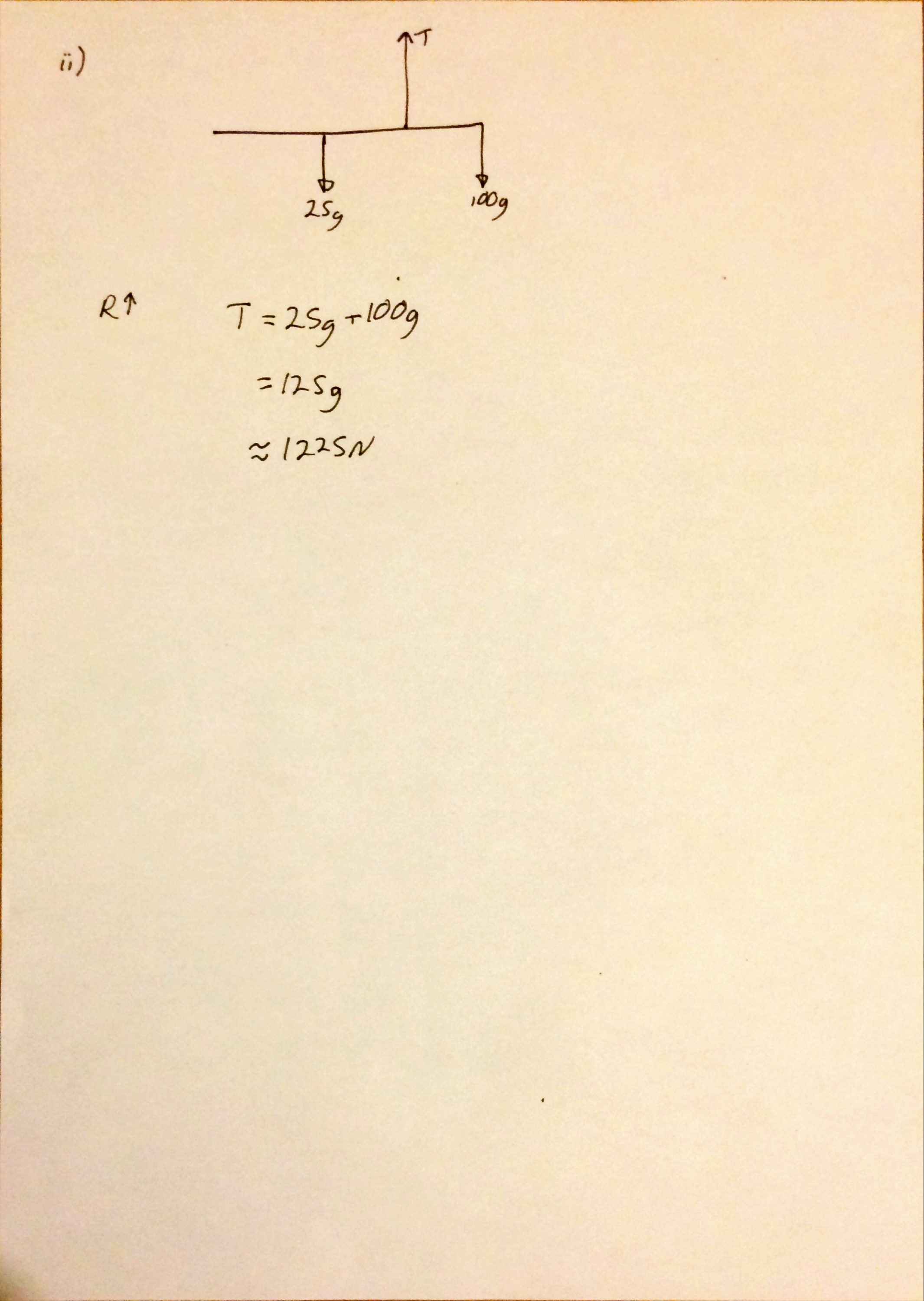 Question 6 part a seems hardly worth asking as a distinct question, but I guess it is only worth one mark. I have also realised I did part c in a much more complicated way than necessary 🙁 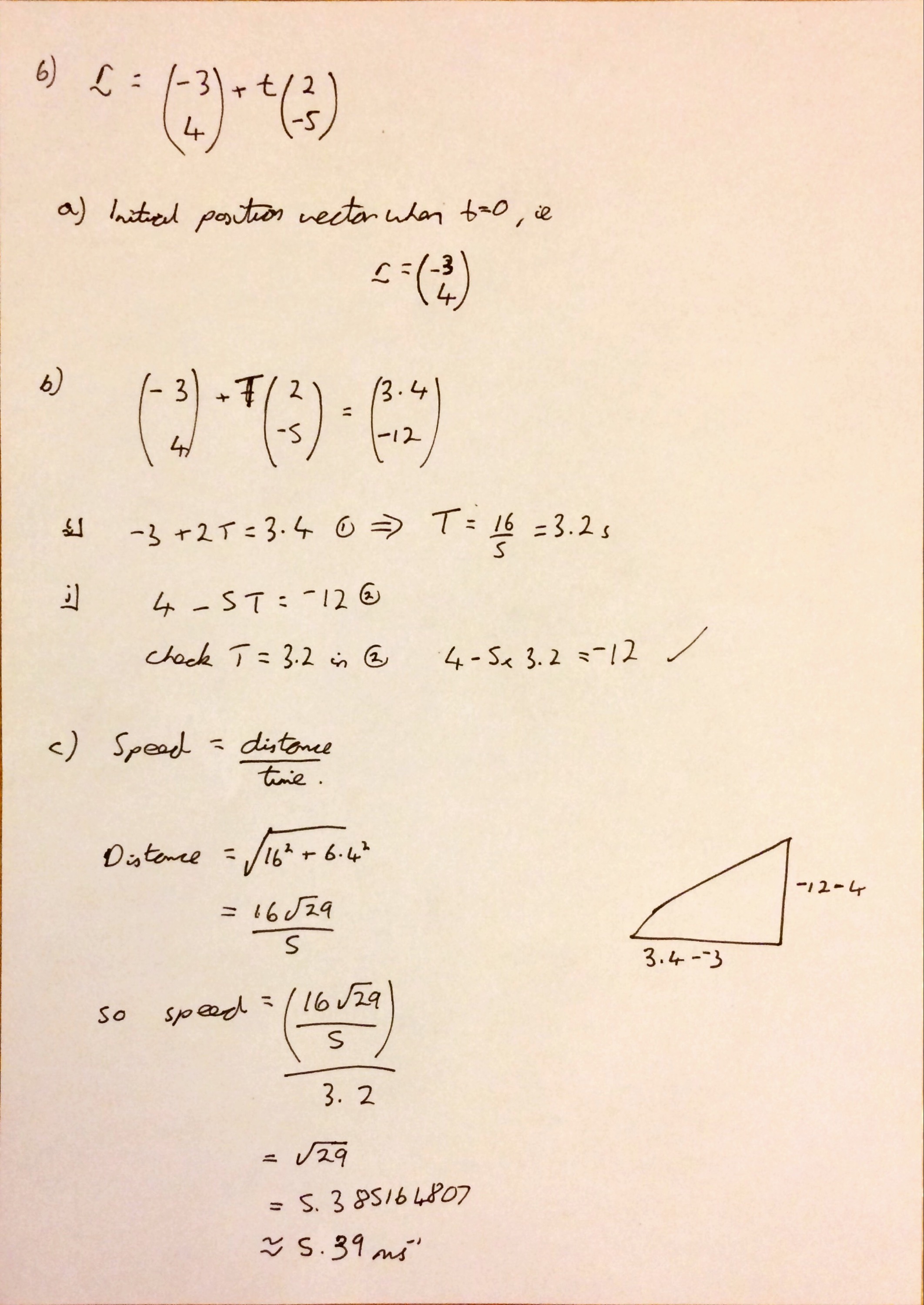 I found question 7 strange as I realised that I had worked out most of part b as I drew the graph. So maybe it is only the shape of the graph and the relative gradients of the acceleration and deceleration that they are looking for in the mark scheme of the first part        . Finding V for the final part of the question is straight forward given the stepping stones you are led through in part b. 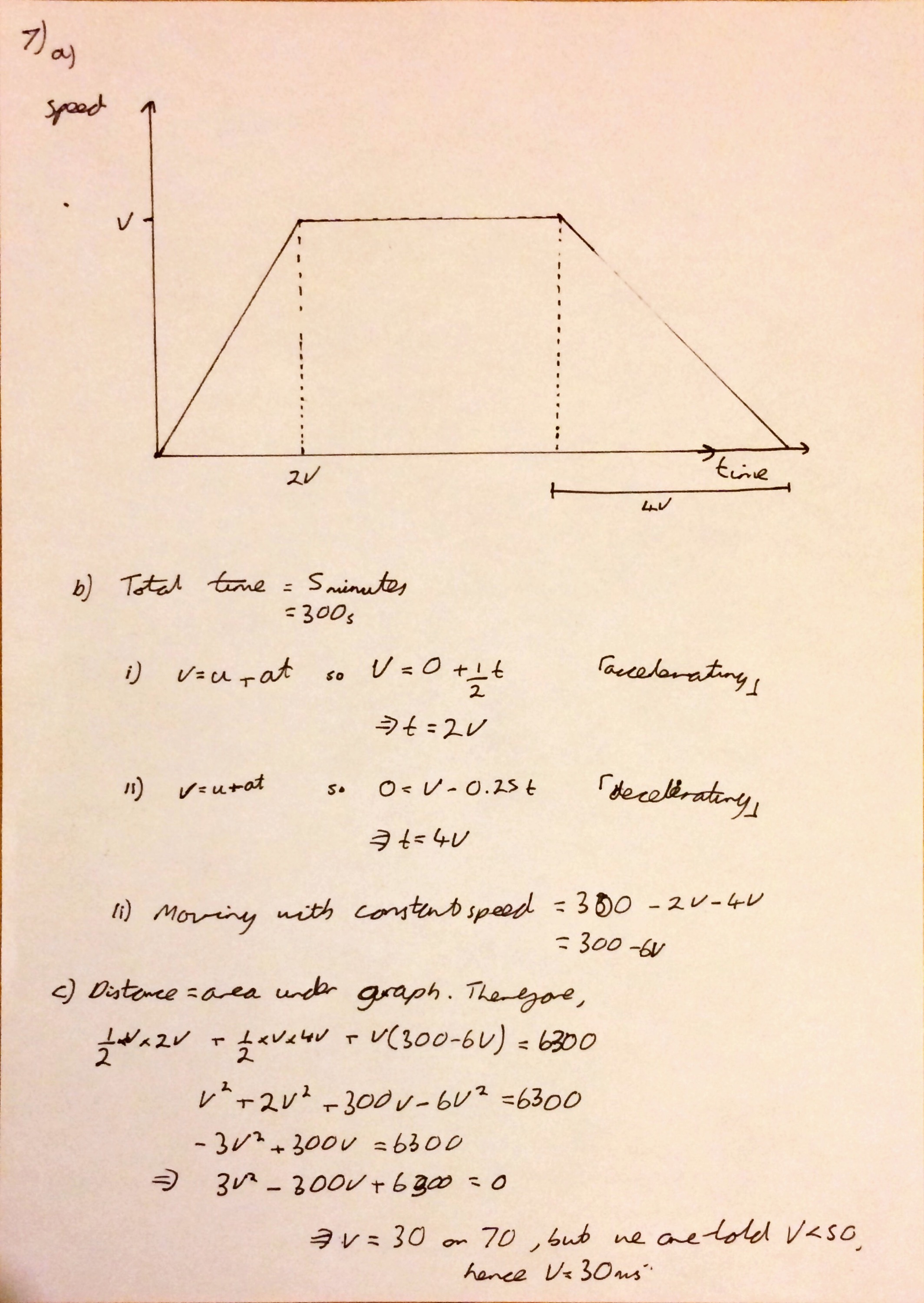 Overall I liked the final question. However, I remember that when I did my A Levels finding the resultant force exerted by a string on the pulley was something that I struggled with. Indeed this is the part of the paper that most of my students said they struggled with. They also all said they were surprised that the first part of this question was worth 11 marks.  I agree I think, it could easily have been worth less marks so it’s quite a nice question to end the paper on I think 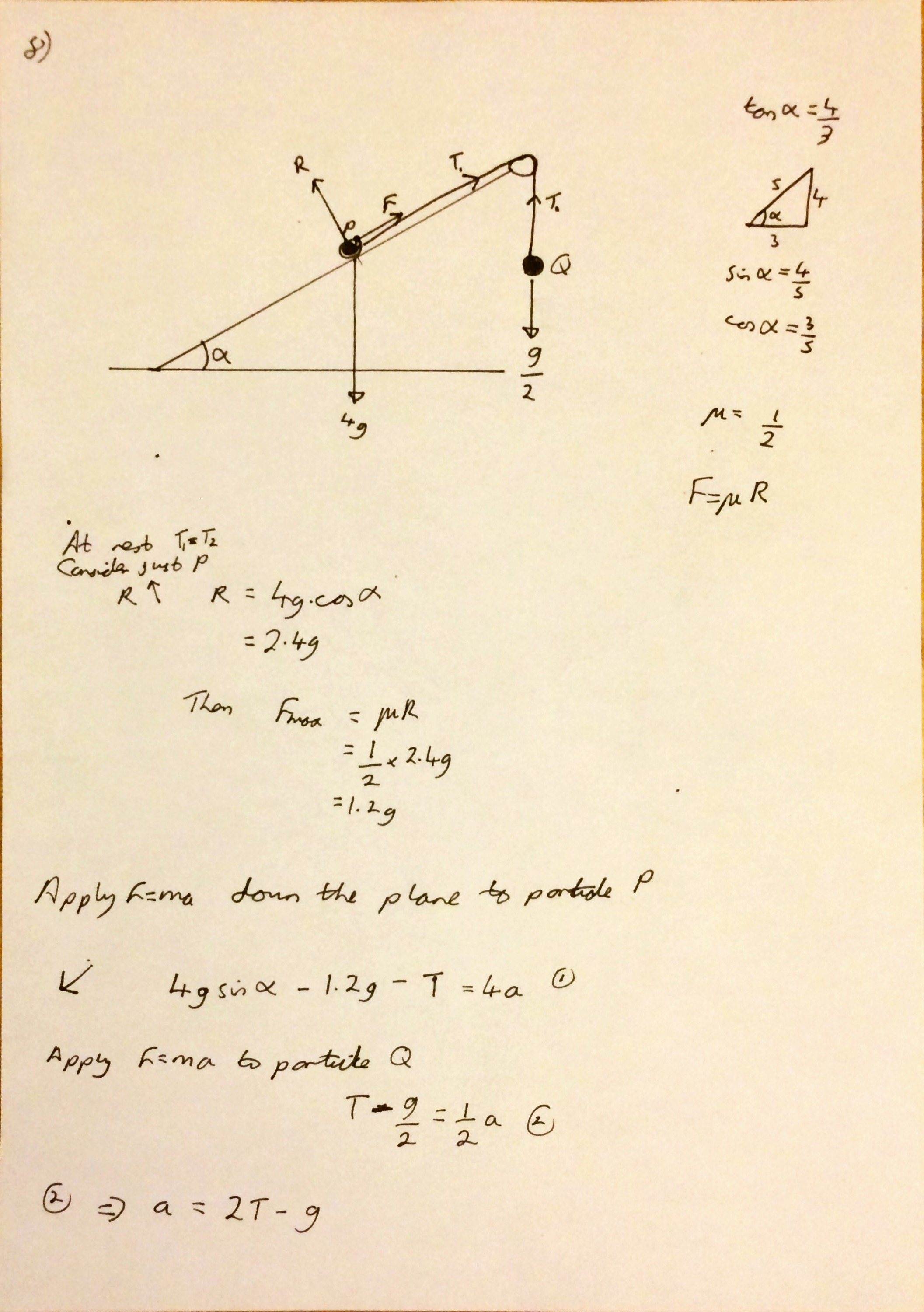 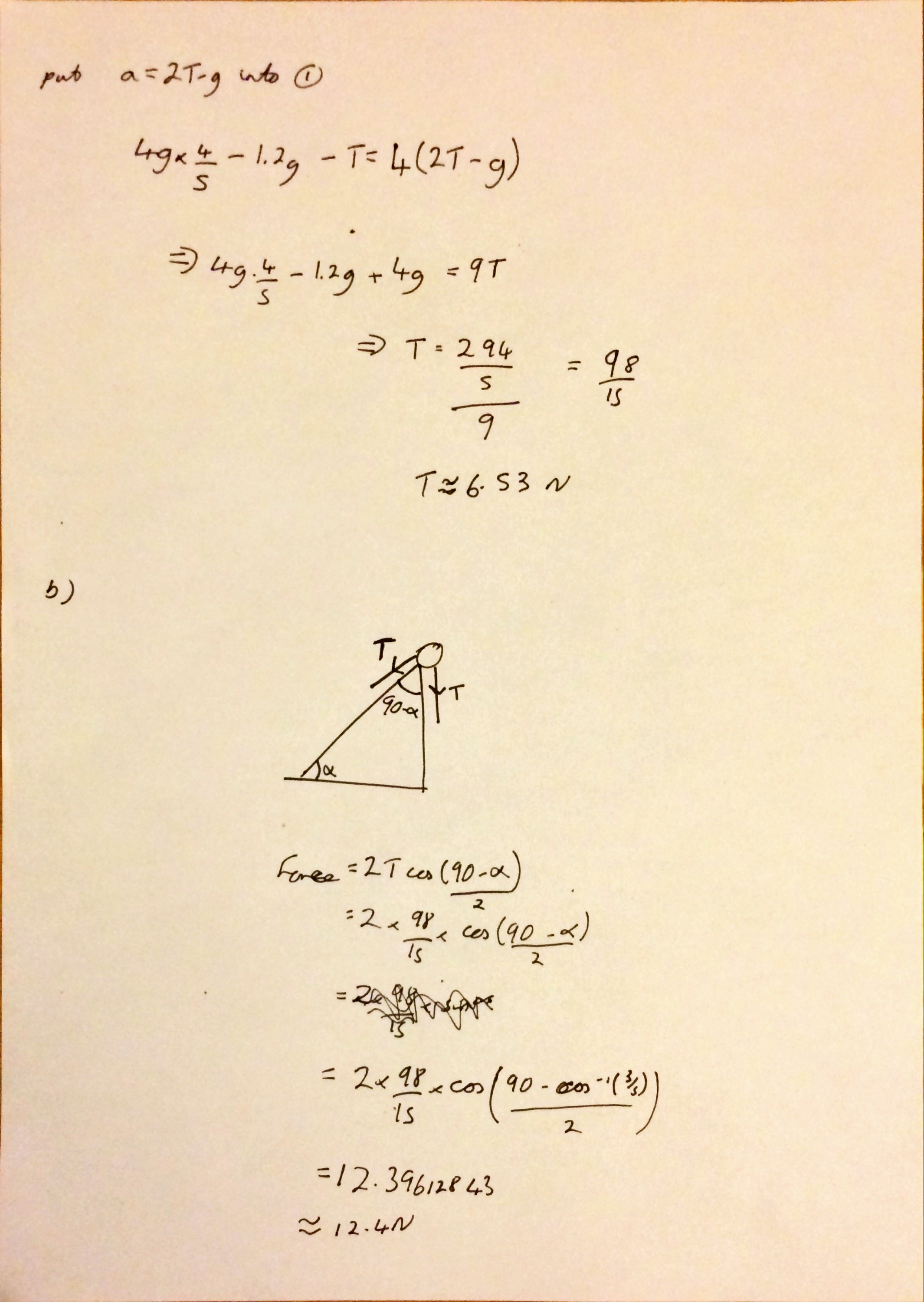 I’d be interested to know what you or your students thought of the paper….

1 reply on “Thoughts on Edexcel Mechanics 1”

Hi Sir,
Im a student and found this quite hard albeit having revised.