A week or so ago Graham Colman (@colmanweb) asked, on Twitter, for a definition and people’s views on Mastery maths.

Before I started teaching I found it slightly odd that people were talking about the “mastery curriculum” as a new thing…. Surely, no curriculum would have the intention of not building mastery of mathematics in students. My personal experience of school mathematics was entirely on top sets and I definitely did achieve mastery and fluency with the concepts – it was just a bit boring repeating all the topics almost every year until Year 11. I was quite shocked, to be honest, when I started teaching and saw how weak some students were when they came into secondary school and how little progress some students made throughout Key Stage 3.

Because of this I was quite keen to get involved in developing a mastery based curriculum for Year 7 and 8. My school has been working in conjunction with others in the East Midlands West MathsHub (@EM_mathshub). The layout of our KS3 is similar to that from ARK’s Mathematics Mastery scheme but not totally the same: 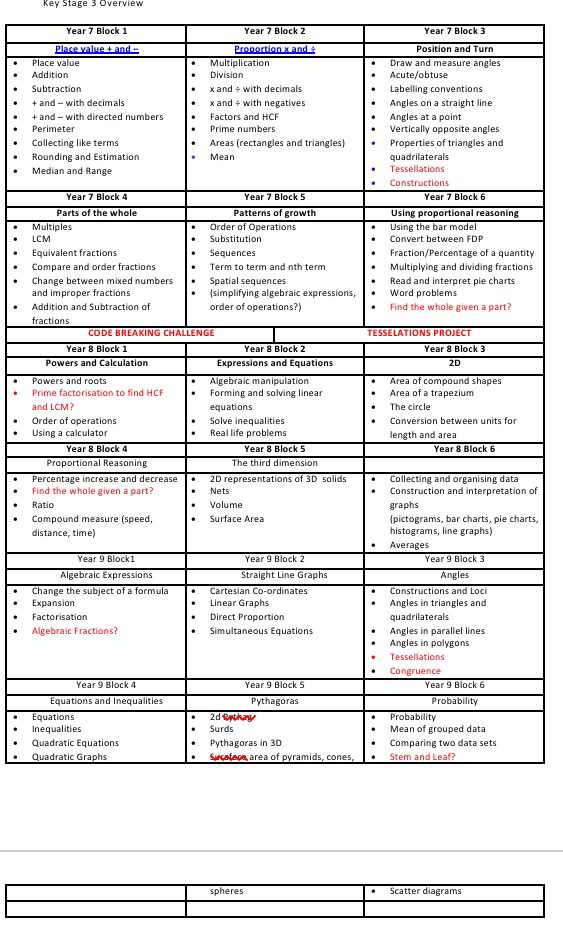 I am hopeful that this approach will lead to a deeper conceptual understanding in all students and lead to improved results as time can be focussed on extending students knowledge over time and not just repeating things.

For a definition of mastery in mathematics as asked for by Graham Colman I think I would say something like:

“A student has developed a mastery in mathematics when they can apply seemingly disparate  techniques and concepts in novel ways  to solve an unseen problem”.

In a sense this is what a research mathematician is expected to be able to do.

Can we expect this of school students?

I think we can, within the confines of the school curriculum anyway – geometrical knowledge could be applied to tackle an algebraic problem and vice versa for example.

Spending more time and delving into topics in more detail allows students to be more critical, giving them a chance to learn how to evaluate strategies and choose the most appropriate given a particular problem.

For this to be successful though I fundamentally believe that students need to be yet with the basic properties of number – being able to decompose calculations into stages that facilitate calculation, deep knowledge of number bonds and times table facts. Some people argue that these skills aren’t so important now that everyone has a relative good calculator on their phone – I disagree! As well as being quicker than finding a calculator and then keying in a calculation these skills also allow you to mentally check the whether a result is sensible.

Last month I read Ian Davies (director of curriculum at Mathematics Mastery) post “Mastery – What it is and what it isn’t!” with interest. I liked how he explained why he felt that he had mastered addition, but not integration (in fact can anyone truly master integration?) He also quotes Helen Drury’s definition of mastery of a mathematical concept – the importance of being able to move between different representations stands out.

2 replies on “A Few Views on Mastery”

Thanks Tom, this is great. I’ve put your quote on last slide of my talk. Will send it over to you when finalised. Talk is on Wednesday, quite looking forward to it now.

Great, glad it was useful – I felt like I was just rambling. Thanks, I look forward to seeing your slides. Hope it goes well!