I was wondering today how many people in the UK had seen the article about Proof School in the San Francisco article.

I saw this article on KQED.org towards the end of July and found it fascinating. The idea of a school dedicated to helping the most gifted at mathematics excel really appeals to me. Personally, I feel that the most gifted students of maths, particularly in state schools, sometimes don’t get the maths education that that they deserve. I remember that when I was a student, it was a widely held view amongst other students that the “top set wasn’t really cared about as they would get the grades needed for the school without particularly inspiring or good teaching”. I certainly, now that I am a teacher myself , don’t believe this is a widespread view held by teachers and generally I think teachers do the best they can for all of their students. However, it is a fact that in many schools top set classes are generally bigger than the lower attaining classes resulting in each individual having less teacher time spent on them. This means that there is, necessarily, less dedicated time spent on developing that gifted individual’s mathematics – to me this doesn’t seem that fair.

Teacher expertise is also an issue – the most gifted students at mathematics by the time they are at secondary school are probably significantly better at maths than most teachers of the subject (I’m definitely including myself here – I just know a lot about one tiny tiny area of maths!), and whilst things such as IMO and UKMT exist I think it could be nice to bring the most gifted students in a region together for sessions where they are taught (or allowed to are discover for themselves) some mathematics that is of a much higher level than they would normally be exposed to in school.

I would urge anyone interested to take a look at the Proof School’s website. I particularly found the academic information interesting (additional languages offered are Latin and American Sign Language – no foreign language which is a bit strange). The structure of the mathematics curriculum is very much more like a University level structure with some really interesting topics included. I like their description of a “maths kid” 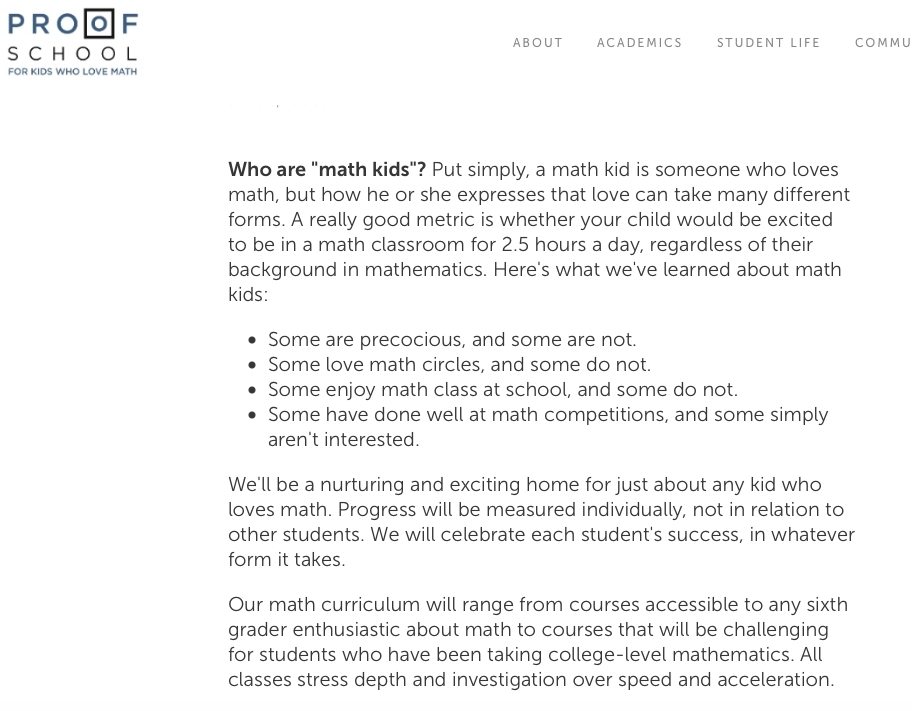 Their characterisation of a maths kid as someone who loves maths is really nice, I firmly think love of maths not ability should be celebrated. If someone loves maths then they will soon be able to excel at maths I think. 2.5 hours of maths in the afternoon would have been a dream for me when I was at school.

The school has axioms that are used to define the school 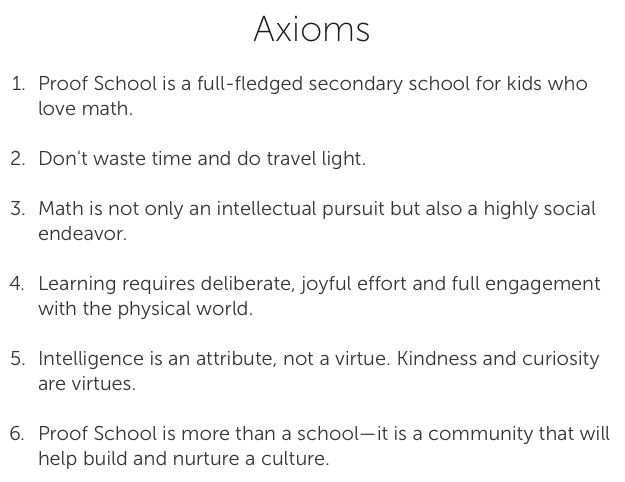 Number 3 is something that I think should be talked about more – mathematics is a social and creative subject, not just an intellectual pursuit!

I wonder if something similar could work in the UK – I would possibly be interested to be part of it if it was tried – the closest that I can think of are academies with a specific STEM focus, such as the newly opened NUAST Academy in Nottingham.

What do other people think of the idea of a school where maths is given much greater prominence (though other subjects aren’t neglected) than it is in most schools?