The first AQA Level 2 Further Maths exam is today. Here is my warmup sheet for it. 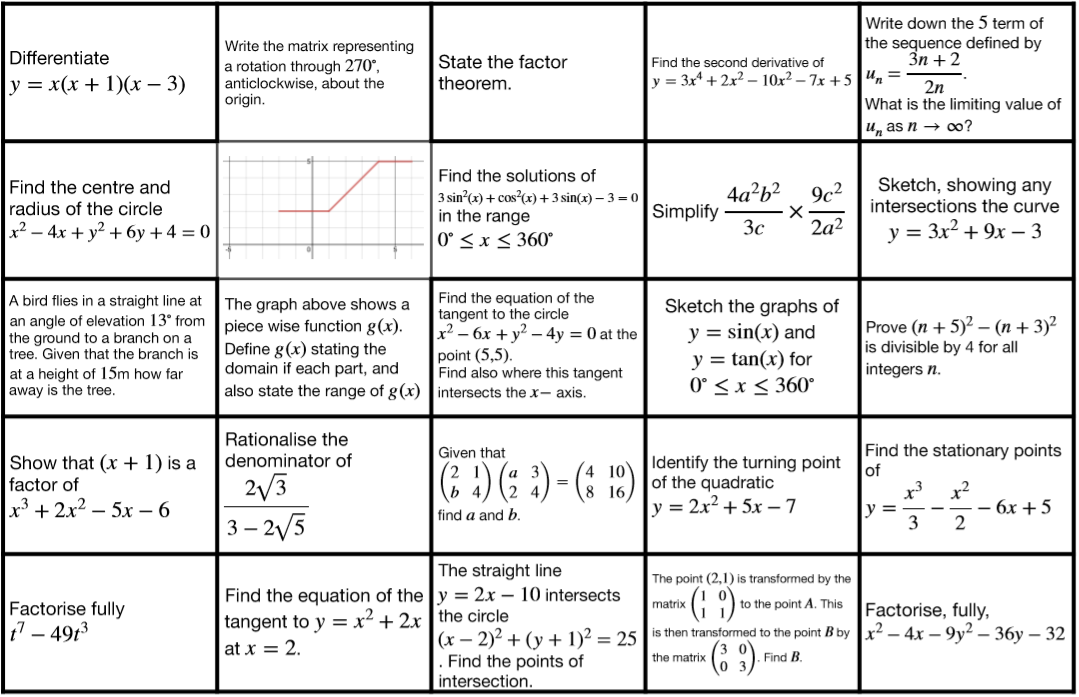 The file is here.

It’s finally here…. the last of this year’s A-Level Warmup sheets. This one is for AQA Paper 3 (Statistics and Pure) 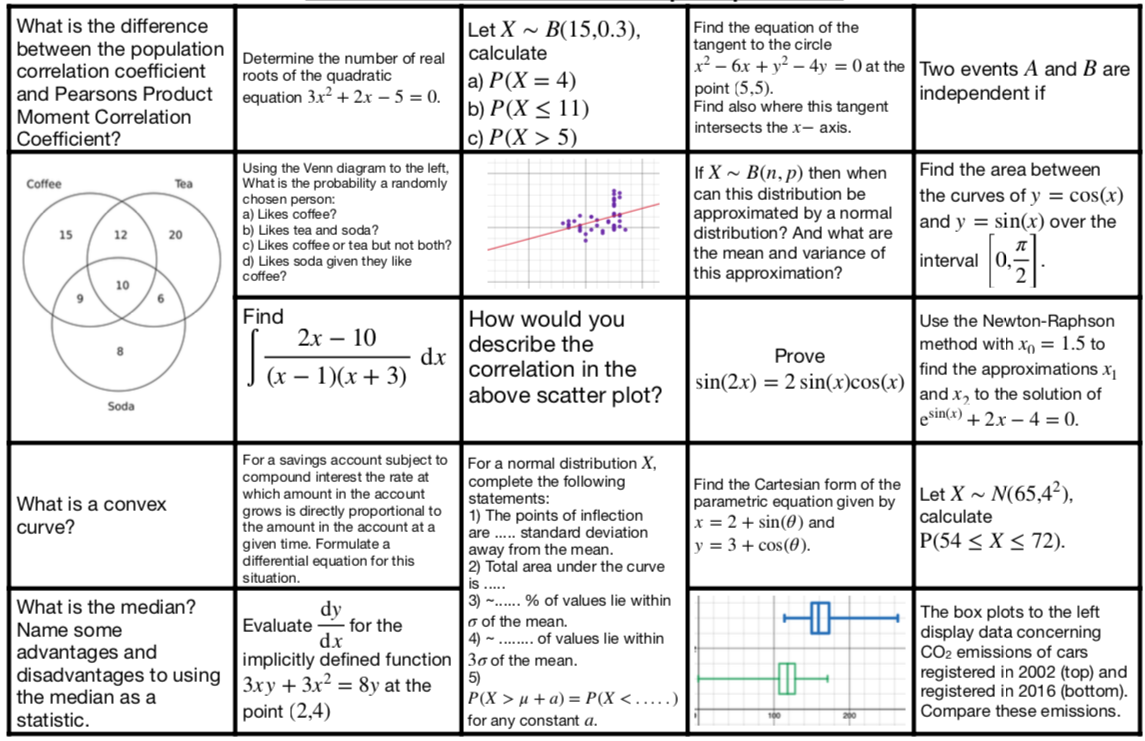 The file (with solutions on page 2) can be found here. I hope it is useful.

My class are doing the Mechanics and Statistics applied options for the AQA Further Maths A-Level. because of this my warmup sheet is focussed on these two areas – sorry I didn’t have time to do one for each applied grouping. Next Year I shall make sure I have a sheet for each of the possible combinations. Sorry!! 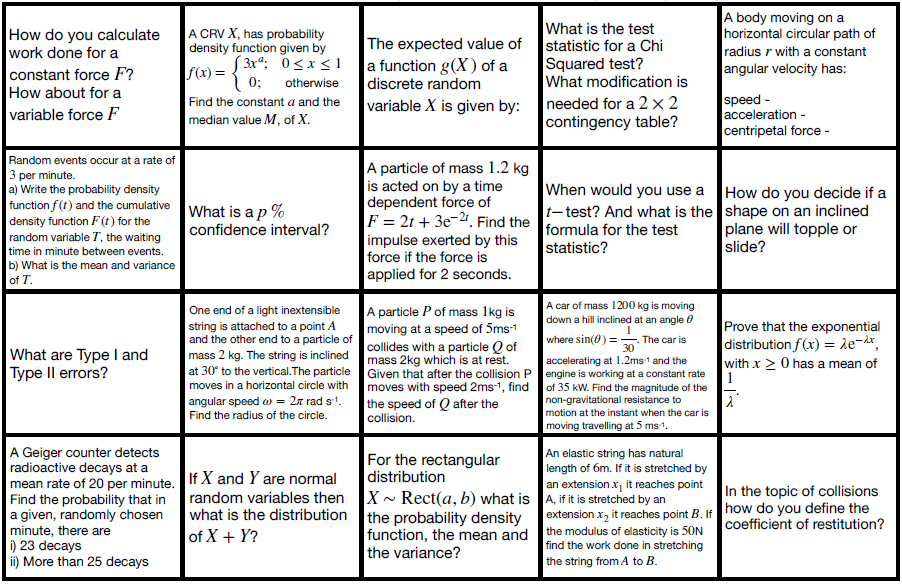 The sheet with solutions on Page 2 is available for you to use here.

Here is the warmup for the AQA A-Level Maths Paper 2 exam tomorrow morning: 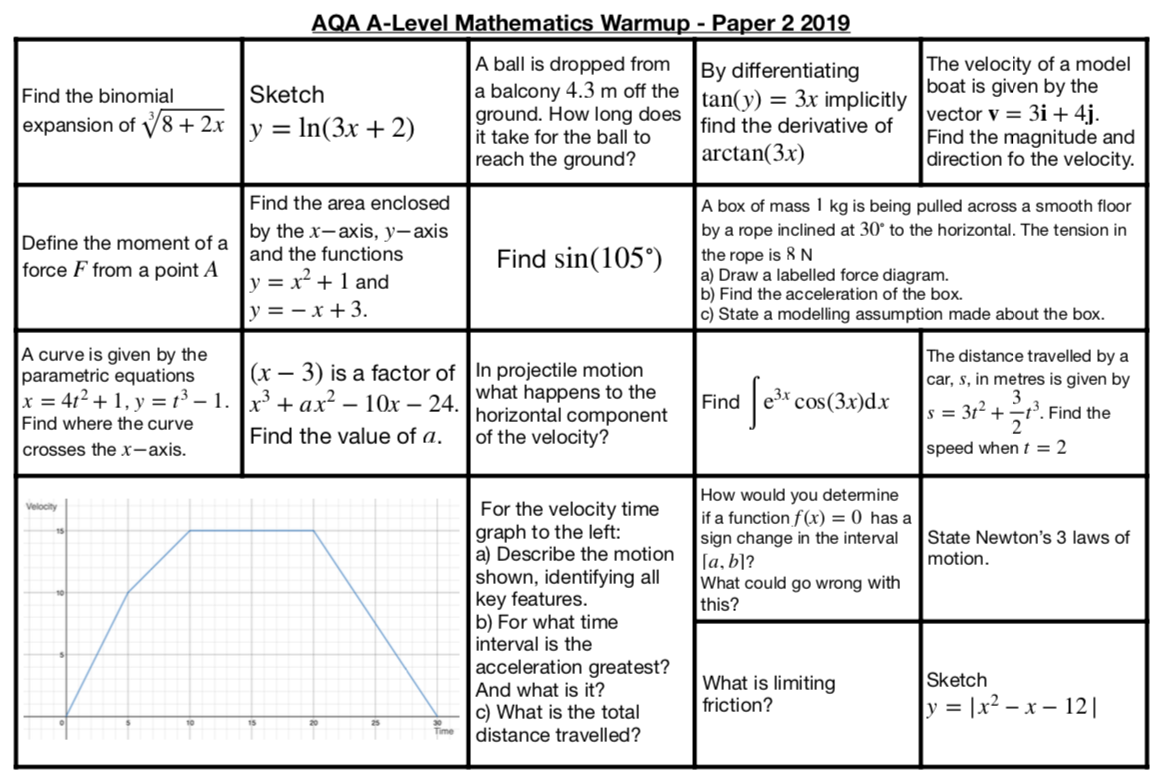 UPDATE: Full paper now up. Solutions by 8pm tonight if not earlier.

This is later than I had hoped, and in fact this is Version 1. I will be adding some extra questions tonight and solutions will be shared tomorrow.

As I have said previously I can’t predict what will or won’t turn up, or the kinds of questions on the pure components of AQA Paper 2 and 3 for A-Level Maths. I think it is likely that some topics not examined so far will come up, and the linked file contains some questions on these topics.

The file is here if you want to use it. 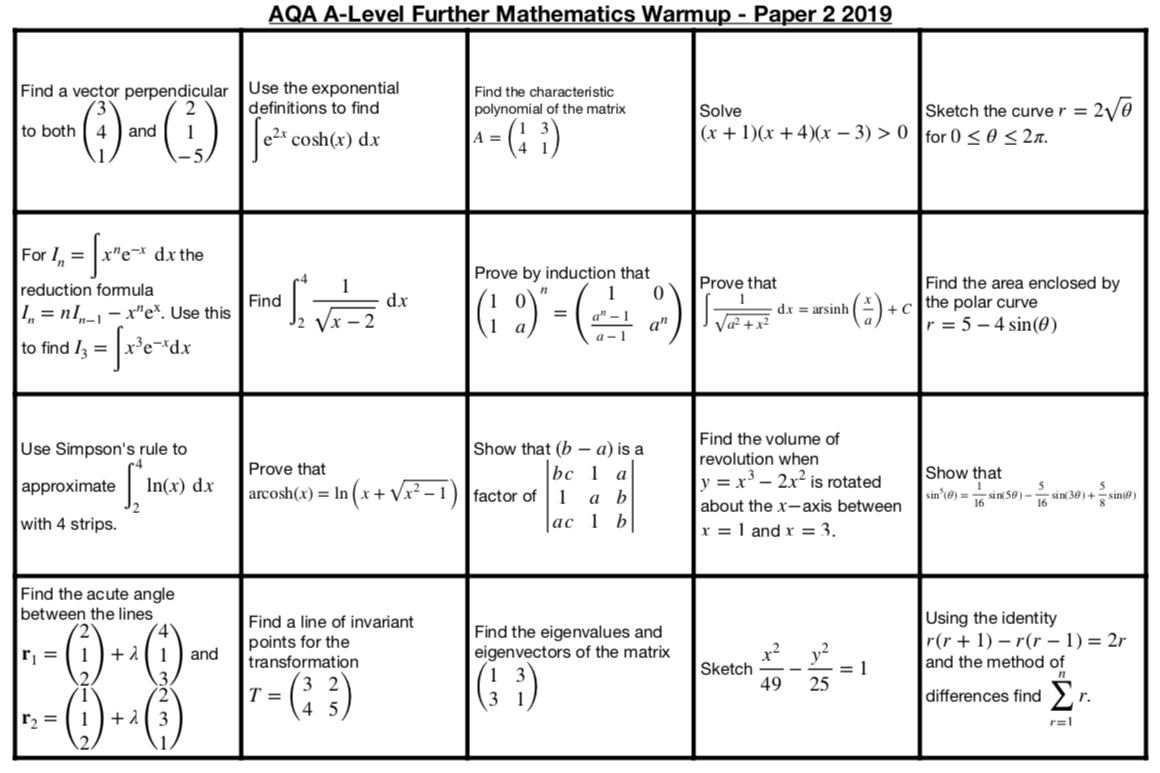 Here is this mornings further maths warmup sheet – tailored for AQA, but it may be useful for other boards too.  There are 5 less questions than on the Paper 1 warmup sheet at the request of my students.

A little later than planned, but here is the warmup for (now) this morning! 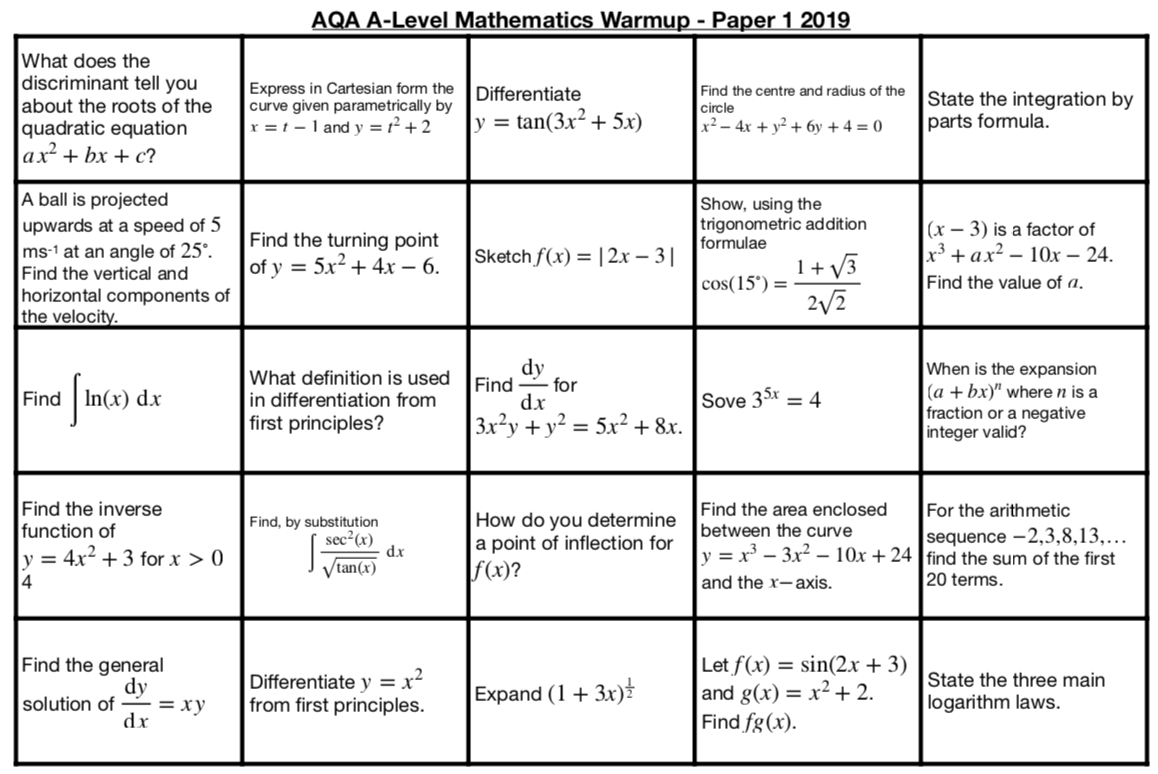 I’ve had an attempt at producing a paper of predicted content for the next AQA A-Level Further Maths paper (on Thursday). 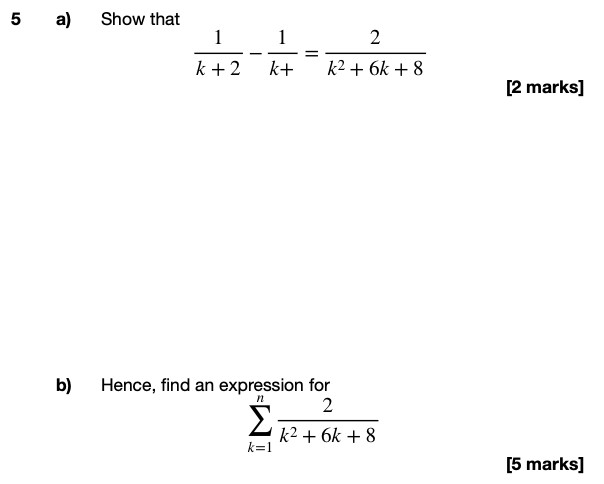 I hope this is useful but please be aware this is not a true paper – in particular the AO weightings aren’t as they should be and it has been put together fairly hastily (I hope there aren’t many mistakes!).

Solutions to follow tomorrow morning – off to do my A-Level Warmup sheet for Paper 1 first.

In my academy we have 30 minute warmups before every exam. As it is the first Further Maths paper tomorrow I have produced a warmup sheet of 25 short questions in the style of Jo Morgan’s GCSE Warmups (@mathsjem). This is targeted primarily at the AQA specification, but I am sure will be useful for other boards too. 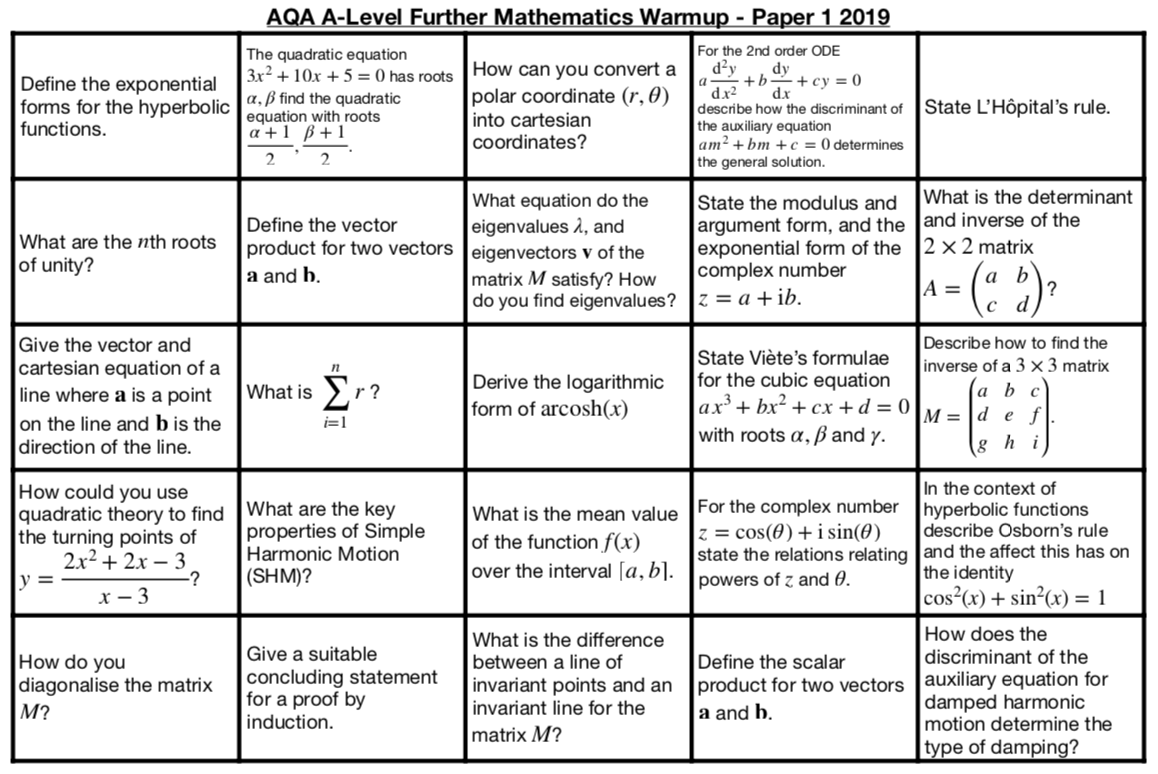 The file (with solutions) can be downloaded here.

I’ve always found integration by substitution satisfying, and the tangent half angle substitutions are particularly satisfying. These are also sometimes called “The Weierstrass Substitution” despite no evidence of it in his writings, and it have being used long before in the work of Euler.

It is guaranteed to transform a rational function of sine and cosine into an algebraic rational function that can be integrated (However, it should be noted that sometimes there will be neater, less laborious ways to evaluate a given integral).

I hadn’t spent too long on this during the course (it isn’t explicit in the AQA course), but contact with them has led me to believe that students could be guided through using these substitutions. Because of this I have produced a short guided work through sheet.

My students enjoyed doing these which is nice 🙂

File for your use is here.